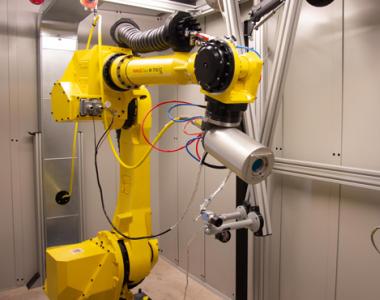 For over three years, ALPhANOV and MBDA have been working together to create a joint laboratory for the scientific study of laser-matter interaction. This fully equipped and highly automated laboratory allows the realization of tests in complete safety with a 10 kW laser source associated with several optical heads mounted on a robot.

ALPhANOV will be in charge of running the joint laboratory to carry research in the fields of interest of MBDA and keeping it operational over the duration of the collaboration.

This laboratory will be open to collaborations on research activities with laboratories of the University of Bordeaux. It will also be exploited by ALPhANOV for its internal or collaborative research and applications of laser processes in industrial fields such as welding, additive manufacturing or laser surface remodeling.

Established in 2007, ALPhANOV is the optics and lasers technology center of the ALPHA-Route des Lasers & des Hyperfréquences cluster. It acts as a technology transfer accelerator and uses its expertise and know-how to serve innovative projects with short and mid-terms industrial target. It offers a variety of services which enables it to act all along the value chain. Its fields of expertise include laser processes and micromachining, laser sources and fiber components, laser and optical systems and health applications of photonics.

MBDA is the only European group capable of designing and producing missiles and missile systems to meet the full range of present and future operational needs of the three armed forces (land, sea and air).

With its locations in five European countries and in the United States, MBDA achieved a turnover in 2018 of 3.2 billion euros and has a backlog of 17.4 billion euros. With more than 90 armed forces customers worldwide, MBDA is a world leader in missiles and missile systems. In total, the group offers a range of 45 missile systems and countermeasures programs in operational service and more than 15 others in development.