To develop and commercialize an innovative system allowing the metallurgical processing of parts intended for aeronautics by laser shock. 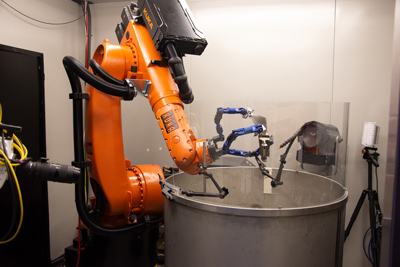 The HELIAM (High Energy Lasers for Improved Aeronautic Materials) project, approved by the Route des Lasers in 2013, aims to develop and commercialize an innovative process based on the laser shock peening of metallic parts mainly for the aerospace market. Absorption on the metal surface or ablative layer of high energy nanosecond pulses rapidly ionizes and vaporizes more of the surface material to rapidly form a plasma. This rapid plasma expansion creates a shock wave that penetrates into the metal, plastically straining the near surface layer to a depth ten times greater than the one achieved by conventional methods such as shot blasting, which consequently enhances the fatigue lifetime and provides resistance to stress corrosion cracking and fretting fatigue. Laser innovation makes it possible to make a significant leap on the LSP technology which becomes portable.

ALPhANOV's mission is to design and produce a nanosecond fiber driver delivering energies of several hundred μJ at 1064 nm. This beam should also have a spatial profile as close as possible to the diffraction limit and a thorough control of the pulse shapes with a very high dynamic range.